Time and temperature abuse, How safe are your processes?

In essence the longer that food items are in these danger zones, the more pathogens can grow.  As we all know foods must be held at temperatures of either above 60 degrees Celsius for hot foods or below 5 degrees Celsius for cold food items.  When reheating food it must be taken from 5 to 60 degrees within 2 hours of reheating processes occurring. For cooling of food items, this must be done is strict timeframes, foods must be taken from 60 to 21 degrees within the first 2 hours and then from 21 to 5 degrees within the next 4 hours to keep that food safe for consumption.

Having worked in food operations for over 20 years, I have seen a multitude of practices that can potentially place food items at risk of time temperature abuse.  The only difference being is now I can unequivocally now prove my assessments that some food processes just don’t work and there needs to be a shift in how these processes are approached to ensure food safety.  It should also be noted that in 12 years of auditing experience, I have found that time temperature logging processes are undertaken either incorrectly or inconsistently across the board.  I have also found a paper based system is doomed for failure particularly with regard to the undertaking of this due to shift changes or breaks undertaken by the majority of commercial kitchens in Australia.

I reviewed and monitored a couple of common food practices particularly regarding cooling of food items.  I did this using the Safe Food Pro Data Logger system.  What I found surprised even me regarding the extent that food items were not in temperature safe zones. The results are as follows.

I undertook this research over a period of 4 weeks and monitored the following items for cooling timeframes:

It was quite disconcerting to discover how poorly these food items cooled and none of them were within cooee of the 2/4 hour guide.

I tried a few different ways to do this including, placing the food item into cold storage directly from cooking, cooling the food items to 70 degrees Celsius before placing into cold storage, placing in plastic tubs raised off the ground, places in clean pots raised off the ground all in bulk containers. I also tried covered Vs uncovered.  I got nearly identical results each time.

See the results below for the mushroom sauce.  To give you some background, the sauce was made during the day, was cooled so the internal temperature was nearing 60 degrees Celsius and was cooled in the pot it was cooked in and was covered.

Temperature at 14:50 PM same day was 47.6 degrees.  This has already failed the first test, as it did not reach the required 21 degrees Celsius within the 2-hour time frame!

Temperature at 18:29 PM same day was at 30.1 degrees Celsius, this being nearly 6 hours after cooling began!

Temperature at 01:05 AM the next day, over 12 hours from cooling commencement was at 15.1 degrees Celsius.

Temperature at 07:35 AM was at 8.5 degrees Celsius.  This is nearly 19 hours after cooling commenced.

The internal temperature dropped significantly once the sauce was thoroughly mixed at 07:52 AM to 2 degrees Celsius.

Now, I got similar results from the beef stew and minestrone soup.  The stock admittedly cooled a little faster (this went from 68 degrees to 32 within 2 hours and then from 32 to 3.9 with in the next 9 hours) but still did not reach the critical limits imposed on us by current food safety requirements.

I did this weekly for the 4 items listed over the 4-week period with the results consistent across the experiment.

Next I did the cooling of roast joints (beef and pork).  The issue with the cooling of these items is that they are extremely dense, this makes it harder to cool these items in conventional ways.  Again, several methods were adopted to see what worked better including cooling to 70 degrees out of temperature control, before placing into cold storage, covering, not covering and storage in different locations in the cold room.

The data collated was pretty damming and clearly showed that what are fairly widespread cooling techniques did not cool food rapidly enough to ensure food safety standards were maintained.

After gathering the data, it was clear that the way that these processes were undertaken needed to change!  This was accomplished in the following ways:

These items were transferred to smaller containers (not more than 5 L) and were left out of temperature control until temperatures reached just above 60 degrees.  They when then lidded and placed in cold storage on wired shelving that allowed for sufficient airflow.  Monitoring of these showed, fairly consistently, that temperatures dropped from 60 degrees to 18 degrees with in 2 hours and from 18 to below 5 degrees within the next 2 hours.  This was the best and cheapest option for cooling bulk items.

Bulk items were cooled on benches out of temperature control until temperatures of just above 60 degrees were achieved, they were then placed in cold storage, again on wired shelving that allowed for sufficient airflow. These unlidded for the duration of cooling.  These items were vigorously stirred every 15 mins for the first 2.5 hours of cooling.  Temperatures dropped from 60 degrees to 21.2 degrees within 2 hours (not quite there, but close enough from my perspective) and then from 21.2 to below 5 within the next 3.5 hours. Not bad but a little time intensive for staff and not effective when staff forgot to mix the items.

Use of ice paddles dropped into to item in question. Bulk items were cooled on benches out of temperature control until temperatures of just above 60 degrees were achieved, they were then placed in cold storage, again on wired shelving that allowed for sufficient airflow. These lidded for the duration of cooling.  Ice paddles were dropped in when placed in cold storage.  Temperatures dropped from 60 to 16 degrees within 2 hours and from 16 to below 5 within the next 2 hours across the board.  Issues with this method include the cost of ice paddles (around $65 each), the cleaning of these items is often done incorrectly causing damage to the paddle or not cleaning all residue off causing contamination issues.  It should be noted that this was probably the quickest way (outside of a blast chiller) to cool bulk liquid items.

There really was only one way to cool the meat items successfully.  This was to cut the meat into smaller portions.  A roast joint of 5.3 KGS was cut in half, these were cooled to 60 degrees before being placed into cold storage, these were covered with greaseproof paper.  Temperatures went from 60 to 20 degrees within the first 2 hours and then from 20 to below 5 degrees within the next 3.

So, it is possible to cool these food items correctly if you can adjust the way you do it.  It is advisable that you check if your food processing activities are placing food items at risk of time temperature abuse.  Doing so will ensure that you are not putting your most precious resource at risk, your customers!

Need help with food safety matters, contact us at Safe Food Pro Australia, it’s what we do. 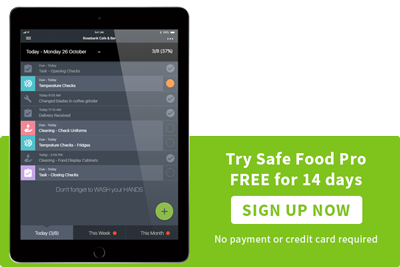 Let Us Know What You Thought about this Post.

State By State Guide to Patron Restrictions from June

With information flying around thick and fast and a lot of misinformation out there-  we have compiled the below state-b...

Glove or no glove - which is better?

During this pandemic we are in, I have observed a major increase in glove use, this from service stations to fast food r...

The changes to how we do business has changed dramatically over the past 3 weeks and many of us have moved from normal b...

Food Safety news to your inbox.

Kick back with a cuppa and keep up to date.

Our aim is for all Australian food businesses to be both safe and efficient. We want you to have more time to do what you love, cook amazing food! We hope you enjoy these articles. We are always looking for feedback on what topics you are interested in.